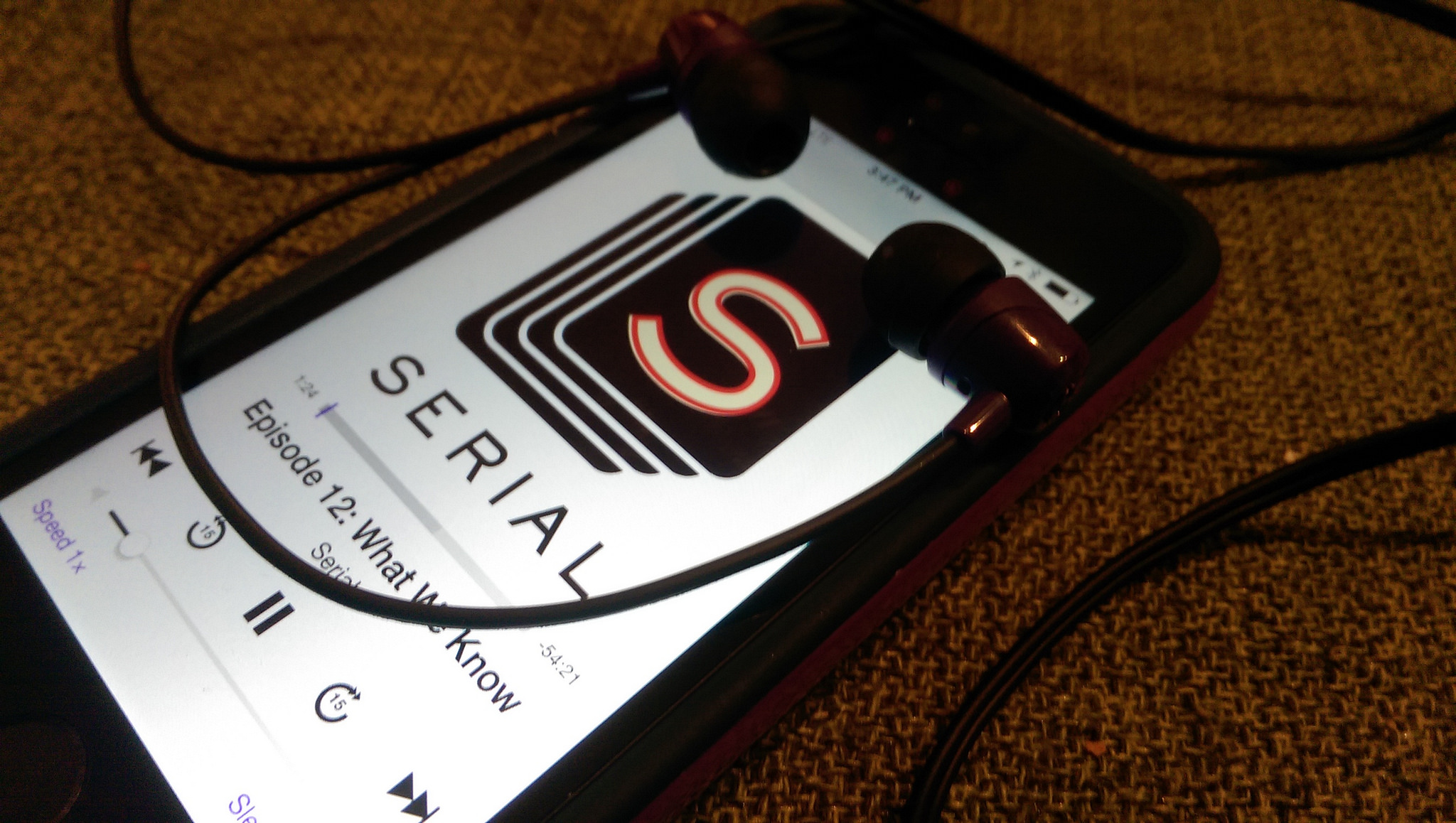 I’ve just completed the final episode of Serial’s second season, and I have some initial thoughts. The short version: Sarah Koenig and her team have redeemed themselves in the last two episodes of the season. Serial found its way out of a problem that, in my opinion, weighed it down during  most of season two. In her focus on the question, in the last two episodes, of whether U.S. soldiers died in the search for Bowe Bergdahl in 2007, Sarah has returned to the most important of Serial’s strengths from season one — the effective and productive complication of truth and its dependence on narrative construction.

To make the claim that they’ve redeemed themselves, I have to make an argument that I’m reluctant to make, but I’ll do it anyway. For most of this season, I have been disappointed with show. Let’s be clear, I’m still a Serial junkie: I’ve listened to it (along with my 10-year old who has become an rabid listener) every Thursday morning, I’ve followed some of stray threads of the show, I’ve looked into the paratextual stuff that’s been posted online, and I’ve talked about it with dozens of people. But quietly, I’ve felt that this season had two central problems.

One is that separating Sarah from her most primary source — Bowe — resulted in a loss of the intimate narrative. At one level, Serial’s first season was about the dynamic that developed between Sarah and Adnan Syed. I enjoyed Mark Boal’s interviews with Bowe, and he think he does an efficient, journalistic job with Bowe. But it’s missing Sarah’s nuance, and her ability to simultaneously coax, comfort, and challenge her interview subject. After every significant chunk of Bowe talking, I was aching to hear Sarah follow it up and Bowe’s response to that.

Secondly, throughout most of Season Two I have felt that this story wasn’t right for Serial. It seemed right at first, but for most of the season, it didn’t have the complexity that I’ve come to expect from the team. Sure, it did open a wider lens onto the war (I’ll get into that more in further down), and sure, that lens was murky enough on its own. But I found myself waiting for a big revelation about why Bowe left the post. Serial tried to make that revelation significant, but it wasn’t. Ultimately, I was left feeling like Bowe was ill-prepared for what the kind of order-following that the military requires and plague by a romantic vision of what he would be able allowed to do as a soldier. I wasn’t convinced that there was some dark military secret that he was revealing by leaving OP Mest. He just wasn’t the kind of person that could accept the military’s chain of command structure. I can relate; I would not be either.

And I felt for the Serial team on this. I wondered if, in the later stages of planning the show, they thought: there really isn’t as good of a story here as we had before. We’ve done some great research on the war itself and politics surrounding how armies work in contemporary times, but ultimately Bowe just isn’t Adnan. He has had horrific things happen to him of course, but not every horrible experience makes a compelling narrative.

But then, they did it: they dug out a question that really requires probing, a probing that just reveals more questions and problems. Did soldiers die in the search for Bowe? I’ll leave it to listeners to digest the particulars of whether and how Serial succeeded in that regard (the episode just posted this morning), but I found that presentation really compelling. It left me the same place I was when I finished season one: I know more now than I did before, and I can speak more intelligently to the issues, but intelligent, rational people CAN disagree on the issue as the narrative presents it, even if it’s clear what opinion Sarah has on the issue. Gaining that kind of epistemological ground is only possible through great research, fantastic writing, and sound storytelling. Great job at the end, Serial!

A couple more reflections on this season . . .

I’ve been teaching Serial (exclusively season one) in my Media and Narrative class at Kennesaw State University. We’ve taken a month to read through Jenkins, Ford, and Green’s book Spreadable Media while folding those insights back on a variety of podcasts with Serial as our other central text. The question we’ve been asking ourselves throughout that work relates to Jenkins, Ford, and Green’s assertions about what makes a media project “spreadable” and how best to engage an audience. These are sketched out ideas at this point, without the benefit of quotes yet, but the “dilemma” I’ve presented to the class is: why does Serial work so well if it does not actively engage its audience? There are tens of thousands of people pouring over the Serial episodes, presenting research, opinions, and new perspectives. Why has Serial not fully engaged that community, and, given that they haven’t, why has the podcast been so superlatively successful. Applying Spreadable Media’s main argument, that “shouldn’t” work as well as it does, so why does it? Does the theory require some revision in light of the podcasting revolution that has taken place since the book’s publication (2013)? Or does Serial possess some extra component that exempts it from the book’s general argument?

I have my own answers to those questions, and I don’t pose the question as critical of Serial. The show is obviously working, and it’s obviously engaging an audience, but just not directly. Or it hasn’t. Until, I think, today’s episode.

Sarah begins today’s episode with the line, “I had a couple of conversations recently, that I just want to tell you about.” She introduces Justin, who was in U.S. Coast Guard boot camp with Bowe in 2006. Justin contacts Sarah and leads her to John Raffy (his name may be misspelled because the transcript isn’t posted yet) who had even closer contact with Bowe during his breakdown episode during boot camp. This is, as far as I can tell, the first time that the show has interviewed a previously unknown source that resulted from listener engagement. Of course, Serial famously re-animated the testimony of Asia McClain, in part due to the fact that she listened to the season one, but Asia was already a source that Serial had identified. While it is true that Sarah discussed the digital discussion circulating Serial in Season One, this may be (and I want to be tentative here until all of us can chew over this in case I’m proven wrong) the first time that a listner engages with Serial and becomes a source. That’s important to me as someone studying the show’s narrative.

And one last reflection. On today’s episode, Sarah introduces Command Sgt. Major Kenneth Wolfe. Of all of Sarah’s sources — military and otherwise — Wolfe sticks in my mind as one of the most important, complicated, and human sources of the Serial’s season two. Sarah introduces him as the highest ranking NCO (non-commissioned officer) in Bowe’s unit, a guy who “knew the commanders, knew the privates, and cared about them.” Wolfe begins his discussion with Sarah by making this statement: “The families who lost sons during this deployment, to let them know that their sons did not die looking for Pfc. Bergdahl.” Wolfe, according to Sarah, has “no love lost” for Bowe and thinks that he is “selfish and a traitor to his unit.” However, Wolfe makes a clear argument, supported by other sources in the episode, that the Afghanistan war, in 2007, was a complicated war zone with a number of competing interests, and that, while the search for Bowe was an item on the military’s agenda, it can’t be said that any activity that purely focused on finding Bowe resulted in a casualty. Wolfe’s careful and earnest answers to Sarah’s statements carry tremendous weight, because he’s essentially arguing logically against his feelings about Bowe. Sarah captures Wolfe’s ability (and yes, I credit them both, because this is the work of a good journalist as well as a good source) to hold two positions simultaneously that create conflict for each other: condemnation for Bowe and protection of him against false claims. That’s masterful and brave.

More to come, but I wanted to get these ideas out when I had a moment.

Image courtesy of Casey Fiesler via Flickr and Creative Commons